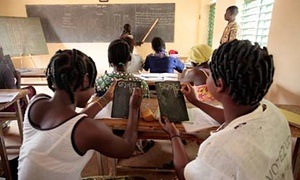 ‘They said they were going to give us ostrich eggs,’ Esther Mbarga, aged 49, recalls. “‘They’re huge,’ they said. ‘Come and we’ll give them to you.'” Aged ten or eleven, she and her friends had never seen an ostrich egg. They were really excited. They were taken deep into the bush and waited expectantly. Then, one at a time, they were led off to have their genitalia mutilated. Esther was pinned to the ground by four women and cut by a fifth. She limped away bleeding and crying. It was hard to walk and urination was incredibly painful for days afterwards. For some reason, the women weren’t happy with the excision. On further checking they decided that there was more to cut. They cut more the following day and yet more a week later.

Esther lives in Burkina Faso where female genital mutilation is not legal but is still carried out covertly. Female genital mutilation comprises ‘all procedures involving partial or total removal of the external female genitalia or other injury to the female genital organs for non-medical reasons’. Not only may the clitoris be partially or wholly removed, but also one or both of the labia. Sometimes the vaginal orifice is narrowed by cutting and repositioning the labia. The World Health Organisation estimates that 91.5 million girls over the age of 9 in Africa have been mutilated in one of these ways. According to the most recent U.N. statistics, 72.5% of women in Burkina Faso aged between 15 and 49 have undergone genital mutilation. In the majority of cases this procedure is arranged and carried out by the older women in a community.

As well as violating a woman’s human rights and causing short term pain and trauma, a mutilated woman may suffer chronic pain and urinary infections for the rest of her life. Her sexual enjoyment is inevitably diminished, she may be unable to give birth normally and her child is more likely to die during or immediately after birth.

Some say that the practice began when men, going to war, wanted to ensure the fidelity of their wives. The reason given today is that it prevents women from being promiscuous. That was why Esther and her friends were cut: ‘our parents believed that if a girl was not cut she would love boys a lot and be unfaithful to her husband.’

Certainly, sex is far less enjoyable for a woman who has been mutilated. It may even be very painful. Oumoul Koulsoum Bouda, aged 24, remembers, ‘My cousin was married for two years. They couldn’t make love. Each time it hurt her and she cried.’ It seems paradoxical, when this practice is carried out for the sake of the husband, that men often cite the fact that a wife either doesn’t want to have sex or isn’t good at it as a reason for divorce.

In 2008 the World Health Organisation produced an interagency statement reaffirming a commitment to eliminate female genital mutilation within a generation. In Burkina Faso, the government has made a commitment to eradicate the practice through educational efforts. Joining the fight are numerous NGOs, such as RECIF, PromoFemmes and The Association of Women Jurists. However, governmental or institutional awareness that FGM is unacceptable is not enough – the men and women of Burkina Faso need to feel the same way. Attitudes to women must change.

As it stands now, the ‘ideal’ Burkinabe woman is submissive to her husband. ‘Before you go to your husband’s house, there’s a little ceremony,’ says Oumoul. ‘The old women give you advice: don’t disobey your husband… even if he does something you don’t like, keep quiet about it.’ After marriage, a woman’s family may be unsupportive if she tries to stand up for herself. ‘If a woman goes to her family with a legitimate grievance, they’re likely to tell her to calm down and go home.’

Isabelle Zongo works for Marie Stopes International in Burkina Faso. ‘Shame plays a very powerful factor in promulgating social conventions,’ she says. ‘Even if a wife wants to leave her husband – be it for domestic violence, insistence on mutilating daughters or other reasons – there is really nothing she can do. She cannot leave and go to her family for support as she will bring shame on her family for acting outside social conventions. Because of the weight that shame carries, many women withstand domestic violence and are unable to seek any kind of help for fear of bringing shame on their family.’

The future isn’t entirely bleak, however. Among educated men and women, at least, attitudes are changing. Mothers are beginning to refuse to have their daughters mutilated – Oumoul’s mother was one of them. Oumoul herself believes that women must start to stand up for themselves and should never become dependent on a man. When asked which women she admires she replies, ‘Ellen Johnson-Surleaf and Angela Merkel.’

As for Esther, she believes that the answer lies in Christianity. A woman, she says, should only be submissive to God and a husband should love his wife like Christ loved his church. She is adamant that she will not have her own daughter mutilated. ‘Enough is enough,’ she says. ‘If it wasn’t good, God wouldn’t have made it. If God made it, why should man remove it?

‘If it wasn’t good, God wouldn’t have made it’ – The Guardian